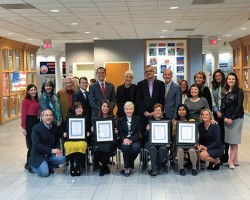 At this year’s conference, the Greater MetroWest Day School Initiative launched two exciting projects—one somber and serious, the other whimsical and fun—highlighting our decade-long collaboration among diverse Jewish schools.

The Initiative announced the creation of The Jerry Gottesman Fund for the Pursuit of Teaching Excellence, a $250,000 endowment of the Jewish Community Foundation of Greater MetroWest NJ (JCF) created in memory of the day school benefactor and leader. Gottesman, with his wife, Paula, was the lead benefactor of the Day School Initiative for more than a decade and first envisioned the idea of bringing denominationally diverse Jewish schools together in a partnership. He died on September 10 while in Israel with family.

Since Gottesman’s passing, donors representing the four schools quietly made gifts in his memory to the JCF to establish the fund, and those gifts were buttressed with matching funds made possible through the Paula and Jerry Gottesman Family Supporting Foundation. The Jerry Gottesman Fund will provide an award, every other year, to honor one educator from each of the four Jewish day schools in Greater MetroWest.

The first award winners were announced at the closing convocation of the conference. The winners were Heather Liebowitz, an early childhood teacher from JEC; Nancy Delman, a former early childhood teacher and professional development coordinator from Gottesman RTW Academy; Paula Spack, who teaches first grade at Golda Och Academy; and Sri Sundaram, who teaches middle school STEM at Joseph Kushner Hebrew Academy. Paula Gottesman of Morristown, and one of her daughters, Archie Gottesman of Summit, were on hand to congratulate the winners, as were some of the donors to the fund.

The award-winning educators were selected by each school based on “demonstrated exceptional initiative in professional learning and collaboration.” Recipients were recognized for accomplishments in three dimensions of their work: seeking professional learning opportunities that align with established goals and applying that learning within their classrooms; sharing professional knowledge with colleagues by providing mentorship to others and seeking opportunities to collaborate; and encouraging a sense of “Quest Citizenship” by participating in Federation-sponsored collaborative professional development programs and collaborating with colleagues in other Greater MetroWest NJ schools.

“Fifteen years ago, none of us here would have believed this,” said Steven Levy of Morristown, a long-time leader of the Day School Initiative, looking out over the crowd of educators from different schools gathered for the day of learning. “But one person did dream this. His name was Jerry Gottesman. Jerry believed in Jewish day school education, in collaboration, in donor partnership, in achievement. And in business as well as in philanthropy, he believed in treating employees with respect and in investing in them. Now we are honoring Jerry with a fund that will perpetuate this part of his legacy for years to come.”

Income from the fund will provide awards that enable the four educators to pursue an extended professional development experience together—likely involving travel to another community—and to bring those lessons and skills back to their schools and the day school collaborative.

The conference opened on a humorous tone, with a launch of the video, “Day School Carpool Karaoke,” featuring Paula Gottesman as the driver singing along with the professional leaders from each school: Rabbi Eliezer Rubin, head of school of JKHA/RKYHS; Steve Karp, executive director of JEC; Moshe Vaknin, head of school at GRTWA; and Adam Shapiro, head of school at GOA. The video—a take-off on late-night comedian James Corden’s popular “Carpool Karaoke” with celebrities—already has thousands of views on social media. You can watch the entertaining video at https://jfedgmw.org/dayschoolcarpool.